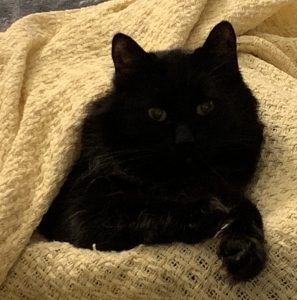 This past week we had to say goodby to our fur kid, Quill, aka Don Quillote de la India Ink.

So, for those who weren’t aware, my youngest daughter’s emotional support animal, Quill, has been ill for about a month now. We first attributed it to something he might have eaten, but changing up his food didn’t help, and he was losing weight. She and Eldest got him in to our vet late last week, and they found a mass – but could not tell if it was kidney, or something else, and suggested taking him to a larger vet hospital than our little town has. They did. He was starting to become dehydrated, and lab tests were abnormal, he also had a rare blood type, which posed additional problems. Sunday morning the vet called to update us.  He was responding to treatment, but the mass was an abdominal mass/tumor, that likely involved his digestive system. Discussion with the doctor indicated that an exploratory surgery could be scheduled for Monday (April 11), and the kids went over to Kirkland to see him. While he was more responsive and talkative, this afternoon, he apparently had a stroke. The doctor called around 5pm, and updated me, as I was the only one home at the time. His condition was failing rapidly, and the doctor didn’t think he would be able to survive the surgery, even if he did, the best odds were that it would only provide 3-6 months more life, but with additional complications for him. The kids called while I was on that call, and I let them know I was talking with the vet, and they came on home. Katrina arrived about five minutes after that call, to find me sobbing and in tears. Then the kids got home, and we repeated the news. Gana called the vet and talked with him – I had asked how late he would be in office tonight, and he said he’d be there until about 7, and that the facility is staffed at all hours. Katrina and I left for the hospital to make our goodbyes, as the kids felt they had made theirs earlier, and on their way home, Gana had decided against the surgery for Quill, due to quality-of-life issues. We arrived at about 7:30, and the doctor was still there, waiting for us. He recounted what was going on, and we told him of the family decision (Gana’s, ultimately, but we all concurred with her choice) – no surgery, and no prolonged pain. The euthanasia forms were signed, and the process begun. We stayed with him until it was over, the staff did their final prep work, and brought him back out to us. We placed him back in his car carrier, something he hated fiercely, but this time, there were no struggles, and we brought him home as his last car ride. He was buried on our property, near the Hawthorne tree, and close to his foster sister, Lila, for whom a similar process took place just shy of three years ago, in May 2019. We’re grieving and we hurt, but Don Quillote of India Ink is no longer hurting. Goodbye, sweet boy. we will miss you forever.

What is Ashleigh reading today?

Mean Justice: A Town's Terror, A Prosecuter's Power, A Betrayak
by Edward Humes

The Tarot: History, Symbolism, and Divination
by Robert M. Place

Meeting the Other Crowd
by Eddie Lenihan